I actually had a really lovely weekend staying in with my quarantine family. I wanted to ride that positive feeling into the work week.

Last night I tweeted this out:

manifesting a good week for myself and everyone who's not a TERF, white supremacist, and/or billionaire

Yes, “manifesting” is very West LA of me. It’s less about some metaphysical belief and more about being proactive. It’s about mentally preparing myself for the work week.

I consistently have a rough time getting into the swing of things on Mondays. It’s stressful and I lose a bunch of productivity to it every week, scrambling to play catch up on the barrage of emails and Slack messages that began at 9:00am Eastern time, or sometimes earlier.

So the idea is basically, “hey let’s think about what my week looks like before I get to my desk Monday morning.”

Still, this good work week I’m manifesting probably won’t look like 40 solid hours of productivity. Rather, I have a handful of things I’d like to focus on accomplishing. After overdoing it earlier this year (and earlier in my career), I’ve learned to underpromise, even—especially—to myself.

There’s always more work that can be done, but don’t commit to it prematurely. Finish the thing in front of you, and then when that’s done you can choose the next highest impact task that’s available to focus on. It’s good to narrow things down, of course–decision fatigue is real. But planning for specific outcomes only leads to tears, and saying that you’ll start and finish tasks at specific times focusing too much on outcome, in my experience.

So instead, we plan for effort. I may only have two hours of focus in me in a given “meh” day, instead of four to six hours on a good day (sometimes more, but we’re underpromising here). Well, let’s make those two hours count.

I’m also hoping some of the lifestyle adjustments I’ve made recently will help me focus better and be effective in my work for the two or four or six hours of focus I do get in a given day.

Cooking, exercise, housework, and other “adulting” tasks are examples of things you can plan effort for. Following through on that planning is easier said than done, of course, especially for those who aren’t able-bodied, neurotypical, or otherwise able to take for granted their unlimited spoons.

Even with all the spoons in the world, good intentions aren’t enough to accomplish everything I want. To improve my chances, I use systems.

On Thursday I reorganized how I do project management on our blog post pipeline using Asana’s timeline feature and omg, the visualization clicked with my brain so well. I’m waiting to see how this new approach works in the long run. Here’s hoping seeing all the steps laid out like that actually gets me to finish things early, instead of “adjusting” (read: ignoring) my self-imposed soft due dates like I always do. 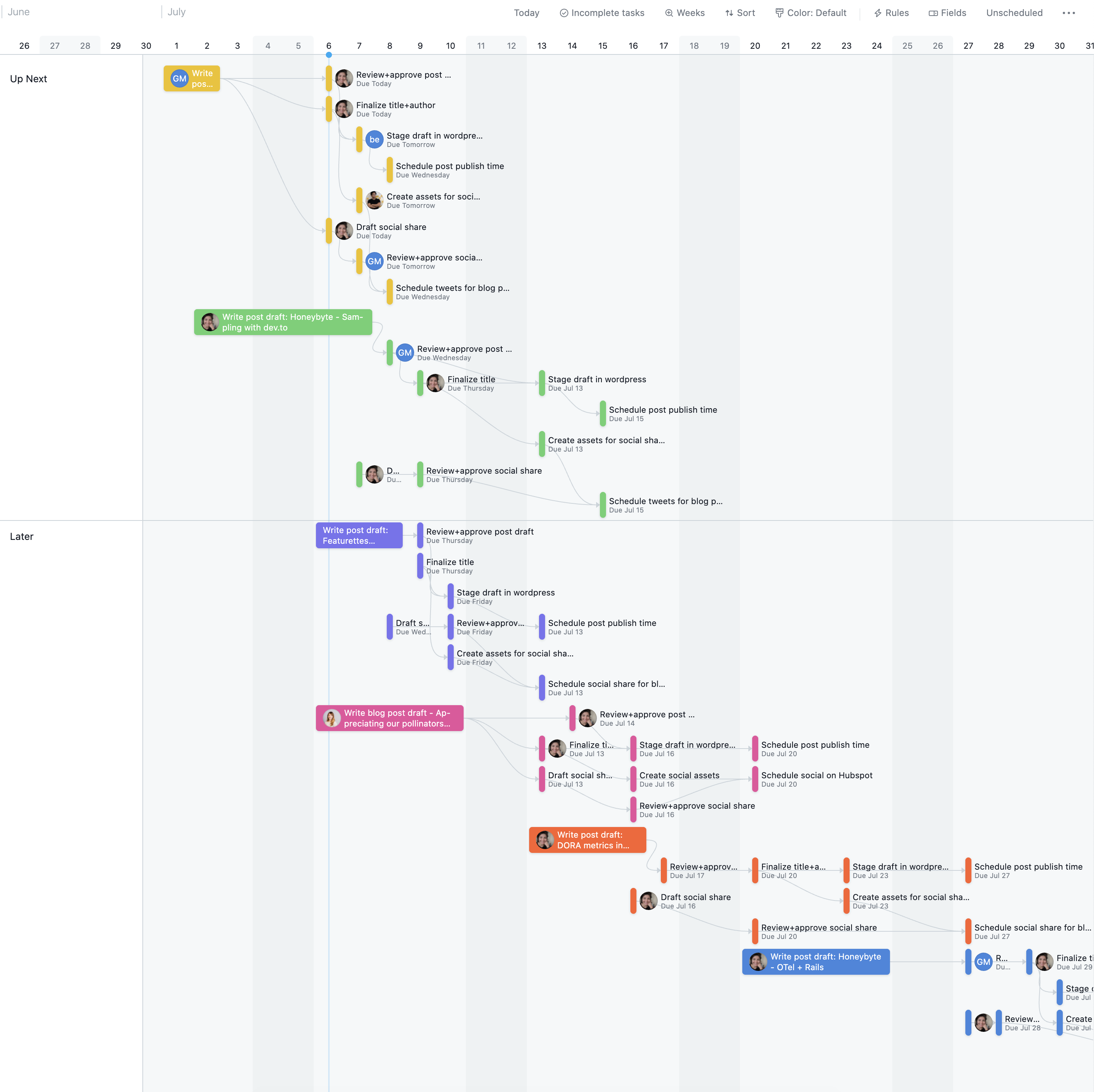 I also asked our team’s executive assistant for some support on the logistics tasks for blog publishing.

Wordpress is tedious and painful, but asking her for help is more about accountability than because I don’t want to do the data entry work. She said she was happy to take things off my plate which is a big relief. I’m calling that a win, especially since I’m so bad at asking for help.

In over my head

Confession: I spent the first two months in this job just scrambling to do all this blog stuff by myself, often the day we were supposed to publish. Like, I’d set an alarm for 3:30am and wake up to write out a whole blog post to be published at 9:00am, like it was a term paper for college. I’d request feedback at the last minute and (at best) inconvenience my teammates. My social media management was an afterthought.

While I’m a decent writer and I’ve blogged on my own for years, I’m an engineer with zero experience maintaining a content pipeline. I’d read The Developer’s Guide to Content Creation, but I was not in a place to apply all these learnings. I was barely keeping my head above water.

It worked out for that initial period, but I realized my borderline all-nighter approach was unsustainable and told my manager I needed to step back from content creation for a bit. This was in mid-May, and soon after that was George Floyd’s murder. Our team stopped publishing blog posts and posting to social media from corporate accounts, in order to make space for mourning and important conversations around dismantling white supremacist institutions.

We ended up not publishing blog content for nearly a month. It’s a terrible coincidence, and I won’t call it luck. I’d much rather deal with my blog post burnout than have Black people be systematically murdered by the police. But that’s not how it works, and I won’t pretend I can do the subject justice in the scope of this blog post.

Back to my lane: deadlines don’t go well with time blindness.

I haven’t had so much deadline-driven work since I dropped out of my CS program (which was partly because I couldn’t deal with the deadlines 😓) so the blog management work is a big mental shift for me.

(Yes, I really just agreed to the responsibility of managing my company’s blog like, “How hard can it be? I’m sure I’ll figure it out.” Dunning-Kruger as fuck.)

I want to get our content pipeline working like a well-oiled machine. I’m already working on process changes to get each finished blog post draft out the door with all the bells and whistles, but now I’m in a place where I have a bunch of drafts, both mine and others’, that need significant work.

I want to be proactive about addressing ADHD-related issues long before they impact my work and teammates. This morning I started looking into getting an ADHD coach, inspired by this informative thread reappearing on my timeline:

"Does ADHD Coaching Really Work Tho?"

Oh, buddy. Strap in and let me tell you the story of the madness that is my life right now.

Searching on mobile quickly became an ordeal so I put a pin in it for now, but I think it’s a good move going forward.